Here’s a joke about Doctor Xombie’s good Fiends Scary Sid and Dawn of the Dead (from the “Friday Night Fright”): 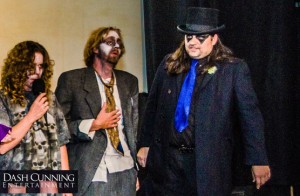 Dawn of the Dead, Scary Sid, and Doctor Xombie

Scary Sid feared his ghoul-friend Dawn of the Dead wasn’t hearing as well as she used to and he thought she might need a hearing aid.

Not quite sure how to approach her, he called Doctor Xombie to discuss the problem.

Doctor Xombie told him there is a simple informal test that Sid could perform to give Doctor Xombie a better idea about her hearing loss.

‘Here’s what you do,’ said Doctor Xombie, ‘stand about 40 feet away from her, and in a normal conversational speaking tone see if she hears you. If not, go to 30 feet, then 20 feet, and so on until you get a response.’

That evening, Dawn is in the kitchen cooking dinner, and he was in the dungeon. Scary Sid says to himself, ‘I’m about 40 feet away, let’s see what happens.’Then in a normal tone he asks, ‘Snookums, what’s for dinner?’

So the Sid moves up the stairs and closer to the kitchen, about 30 feet from Dawn and repeats, ‘Dawn, what’s for dinner?’

Next he moves into the un-living room where he is about 20 feet from her and asks, ‘Sweetums, what’s for dinner?’

Again he gets no response.

Again there is no response.

So he walks right up behind her. ‘Dawn, what’s for dinner?’

‘For goodness sake, Sid, for the FIFTH time, BRAINS!’

Joke for the day:

It was the mailman’s last day on the job after 35 long years of carrying the mail through all kinds of weather to the same neighborhood.

When he arrived at the first house on his route he was greeted by the whole family there, who congratulated him and sent him on his way with a big gift certificate envelope. At the second house they presented him with a box of fine imported cigars. The folks at the third house handed him a selection of terrific fishing lures.

At each of the houses along his route, he was met with congratulations, farewells, cards, and gifts of all types and values.

At the final house he was met at the door by a strikingly beautiful young blonde in a revealing negligee. She took him by the hand, gently led him through the door (which she closed behind him), and led him up the stairs to the bedroom where they had a most passionate liaison. Afterwards, they went downstairs, where she fixed him a giant breakfast: eggs, potatoes, ham, sausage, blueberry waffles, and fresh-squeezed orange juice. When he was truly satisfied she poured him a cup of steaming coffee.

As she was pouring, he noticed a dollar bill sticking out from under the cup’s bottom edge. “All this was just too wonderful for words,” he said, “…..but what’s the dollar for?”

“Well,” she said, “Last night, I told my husband that today would be your last day and that we should do something special for you. I asked him what to give you?”

He said, “…Screw him…give him a dollar.” The blonde then blushed and said, “….But the breakfast was my idea.”

Not a lot going on at the moment so I figured I’d post an old joke:
(Author Unknown)

-An Irishman’s First Drink With His Son-

I was reading an article last night about fathers and sons, and memories came flooding back of the time I took my son out for his first drink.

Off we went to our local bar, which is only two blocks from the house.

I got him a Guinness Stout. He didn’t like it – so I drank it.

Then I got him an Old Style, he didn’t like it either, so I drank it.

It was the same with the Coors and the Bud.

By the time we got down to the Irish whiskey . . .

I could hardly push the stroller back home.